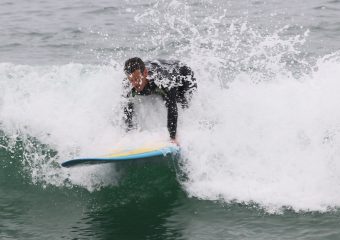 The Early Bum Clothing Company is owned by The Earl Banes Company. Earl Banes was a legend (at least in his mind) in Southern California in the 70’s and 80’s. It was during this time that surfing shifted gears, the car culture adapted to a fuel shortage and goofy economy cars.

It started with a T-Shirt Idea

Sitting in the water one morning someone said “If you get here earlier like Earl did, you would get more waves. He had no idea he was talking to Earls Grandson. That insight sparked the idea of the Early Bum Shirts. Earl Banes was called an early bum by many. Some because he was so early to the office he made them look bad. Others because he left early to race to vegas or hit an afternoon session in Santa Monica.

That day, the Earl Banes Company was born, and so was the character of the “Early Bum”. The Early Bum character embodies the philosophy of Earl Banes and a little bit of everyone who lives in Southern California.

SoCal is a very unique crossroads of culture that can be found no where else. It is a unique venue for life and expression with Hollywood’s entertainment industry, the famous music of the Sunset Strip, It’s car culture and it’s surf culture. SoCal even has ski resorts and water ski lakes. A combination that is found no where else in the world.

The Earl Banes Company is located just a few blocks from those very tracks in a small warehouse in Huntington Beach.

The Early Bum Gets The Wave

Each morning before starting up the office, Earls Grandson heads out to his favorite surf spot with his “tribe”. Mostly veterans and first responders, the Bolsa Chica 16.5 as they are called, were the inspiration for the Early Bum.

Just One More!, JOM and BEACHMODE are all copyright© 2019 all rights are reserved.

5% of all net proceeds are used to support the arts and Warriors on Track.

This is an optional text. Share your comments and win surprise gifts!
BUY FOR ME